Curatorial Projects > Wanting It Both Ways

Wanting it Both Ways April 9, 2022 - June 4, 2022 CHICAGO, IL–The Ukrainian Institute of Modern Art is delighted to announce a new group exhibition titled Wanting it Both Ways, featuring mixed media works by Bill Conger, Tanya Hastings Gill, Mie Kongo, and Jennifer Mannebach. Before it became synonymous with a defect or shortcoming, the etymology of the word “flaw” related to a fragment, splinter, or piece of something, and was closely associated with the idea of a stray ember. A fragment or “flaw” as a spark, a glowing ember, is an incendiary condition quite different from the more typical notion of a fragment as a leftover or remnant. These insistent fragments may preserve a fleeting moment or memory; something that is not embalmed in time but is a flickering touchstone to revisit and find more–more permutations, more iterations, and more potentialities. These artists contend with the desire to capture a sense of the fugitive, often manifesting in fragmented forms that speak to the interdependence of things. They are acutely aware of how small altercations can shift things substantially, looking at the interplay of material identities, as well as the relationship between the maker and the materials. This practice of working with forms and ideas can result in work that can feel like a temporary capture— revealing the desire to have it both ways, to hold still for a moment in time, just long enough to see what gathers at the edges before releasing it into another recombinant state. 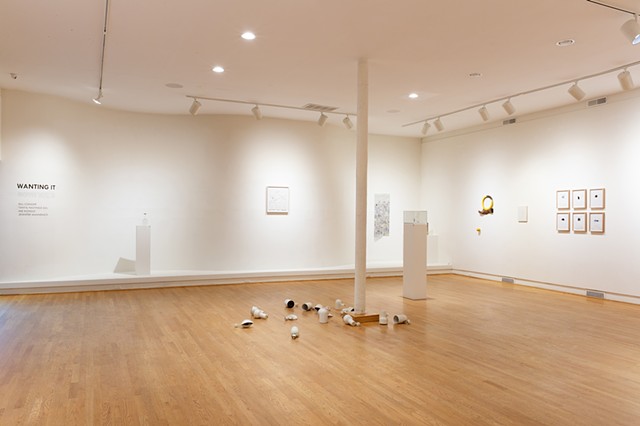 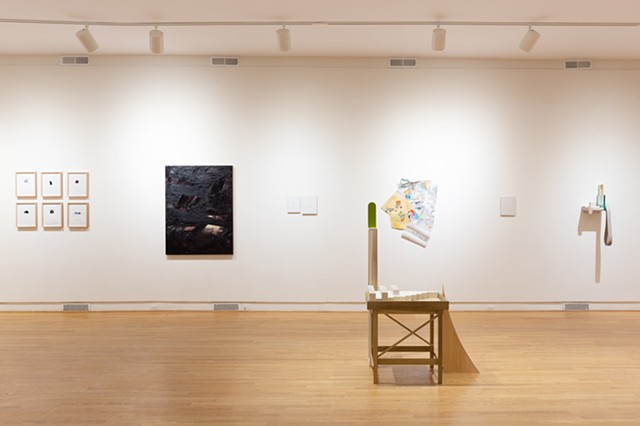 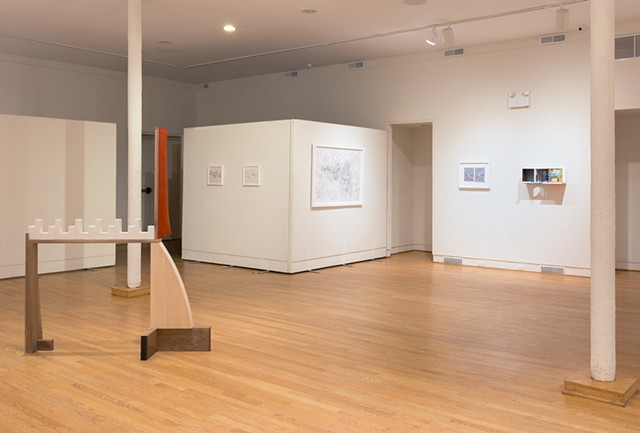 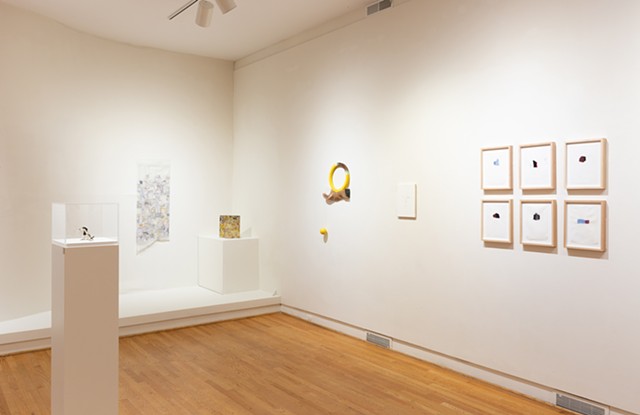 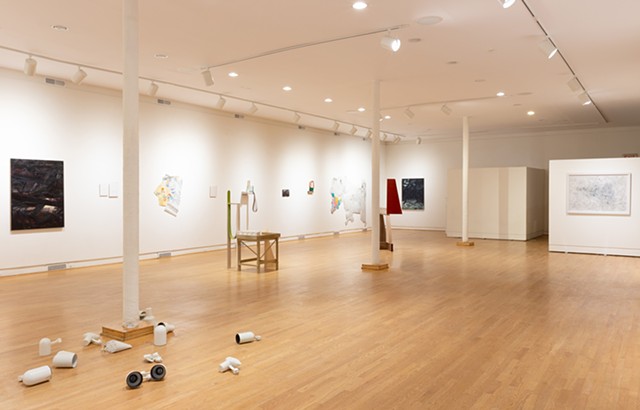 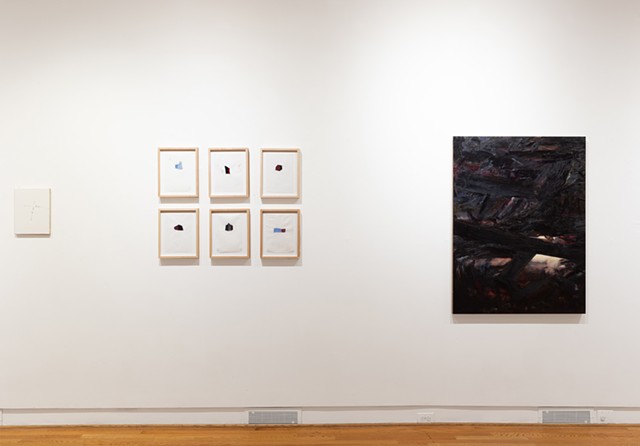 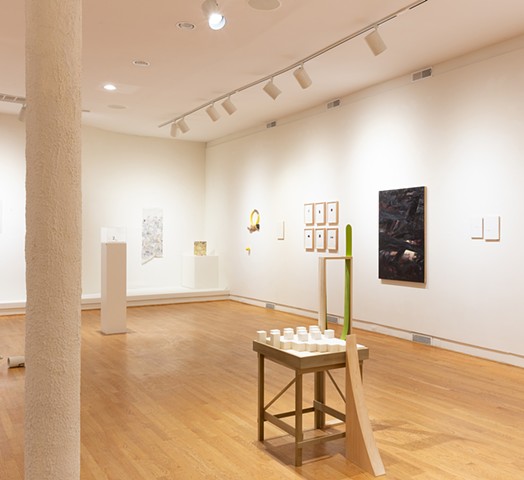 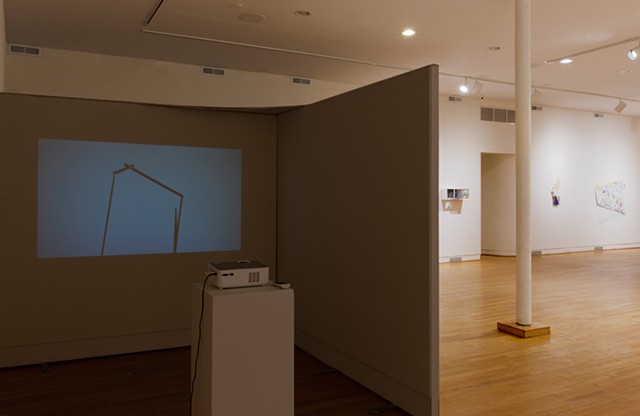 Artist Bios: Bill Conger is Chief Curator at the Peoria Riverfront Museum and is formerly the Senior Curator of Contemporary Art at University Galleries of Illinois State University. Beginning in 1993, he taught painting, drawing, and color theory at both Illinois Central College, Bradley University, and Illinois State University where he also received a Masters of Fine Arts in painting. A practicing artist for over thirty years, Bill’s painting and sculpture has been exhibited throughout the United States as well as Germany, Poland, Ireland and New Zealand. He has presented numerous lectures on his work at venues including Drake University, Southern Illinois University, the Herron School of Art, the School of the Art Institute of Chicago, the Milwaukee Institute of Art and Design, Brigham Young University, and Golden Parachutes Gallery in Berlin, Germany.

Tanya Gill is a multimedia artist whose work explores mental constructs, adaptation, and restoration. Gill’s work shifts between the political, social and personal realms, endeavoring to articulate and reverberate feelings we all share. Gill has been a Fulbright-Nehru scholar, as well as Artist in Residence at McDowell, Haystack Mountain School of Craft and The Ragdale Foundation. She received her BFA in painting from the School of the Art Institute of Chicago, and earned her MFA in painting at the Cranbrook Academy of Art. Gill calls Northern California, Northern India, and Chicago home. Currently she is nestled in Chicago, IL where she is a Community Artist in Residence at Hyde Park Art Center.

Mie Kongo grew up on the outskirts of Tokyo, Japan, and now lives and works in Evanston, IL, where she makes multidisciplinary work. Her work has been exhibited nationally and internationally, including recent exhibitions at 65Grand, Audible Gallery at Experimental Sound Studio, Seerveld Gallery at Trinity Christian College, Devening Projects + Editions, Arts and Literature Laboratory, 4th Ward Project Space, Cleve Carney Art Gallery, and Hyde Park Art Center. She has completed residencies at Shigaraki Ceramics Cultural Park and European Keramic Work Center. She is a recipient of Joan Mitchell Fellowship in 2021. She received a BFA from the School of the Art Institute of Chicago and an MFA in Ceramics from Cranbrook Academy of Art. She is Associate Professor, Adj. in the Ceramics department at the School of the Art Institute of Chicago.

Jennifer Mannebach’s work addresses remnants, boundaries, and transition. She has exhibited at the Hyde Park Art Center, Flatfile Gallery, Jack Olson Gallery and others, nationally and internationally. In 2006 she was a visiting artist at The American Academy in Rome. Mannebach received her MFA from The School of the Art Institute of Chicago, where she subsequently taught for 6 years. She is an adjunct professor at Concordia University, an Artist/Researcher with CAPE, and advocates for artists at Little City Foundation where she was an art facilitator for over a decade. Awards include the Illinois Arts Council Fellowship, CAAP grants, IAC grants, and the Governor’s International Arts Exchange Grant. Recent exhibits include You Never Held It at the Right Angle at the Evanston Art Center, and an exhibit at Governor’s State University. This summer she is looking forward to embarking on an art and science residency at PLAYA in Oregon.